Debbie has nearly 20 years of investigative experience and journalism on topics of insurance, mortgage, and financial advice. 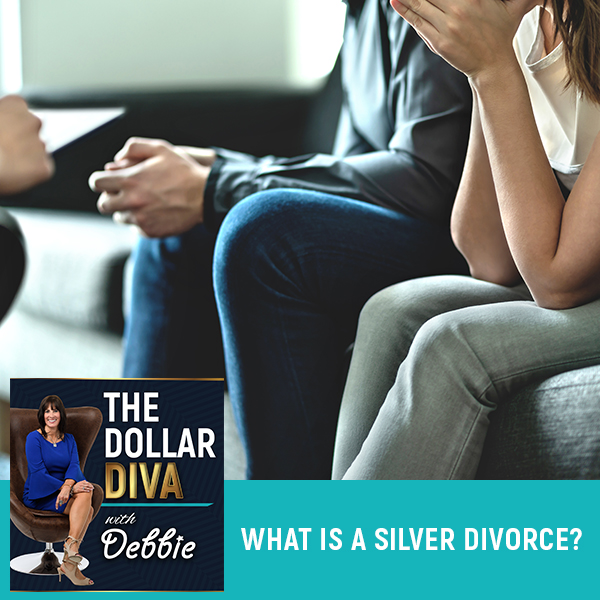 What Is A Silver Divorce? 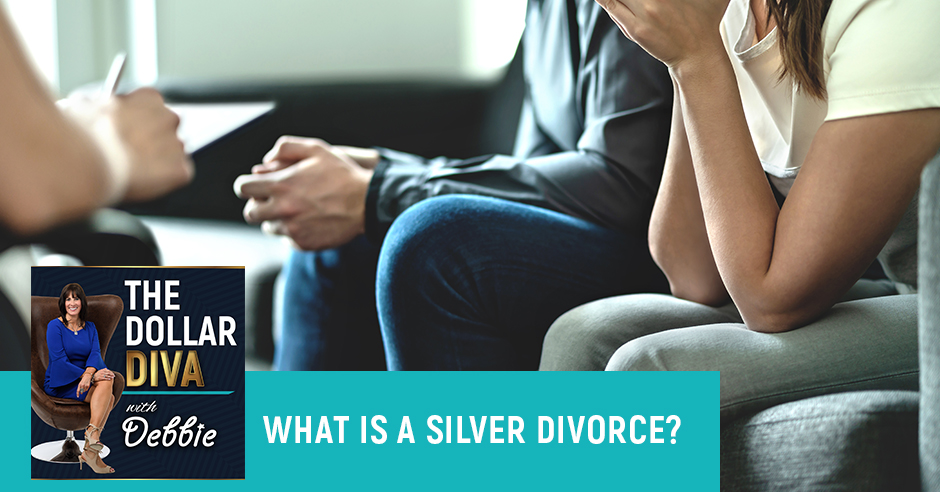 There is no certainty that life will ever stop giving you obstacles to overcome. Even people over fifty encounter some issues, and one of those may be the challenge of going through a silver divorce. On today’s show, Debbie Bloyd defines what a silver divorce is. She also shares how people going through this type of divorce can protect their assets, cope with the situation, and eventually move forward.

Listen to the podcast here:

What Is A Silver Divorce?

We need to talk about something called Silver Divorce. I’ve been reporting on this for several years and I see it in my practice every day. I’m a mortgage broker. I’m an investment advisor. I do insurance and real estate and dealing with that many types of people for that many types of reasons. You hear everything, you see everything. Let me read you some statistics. There’s been a decline in the overall divorce rate in the US coupled with the increase in the phenomenon known as Grey Divorce. We received a lot of coverage over the last few years, and I have clients to prove it. Divorce over 50 brings a myriad of consequences both obvious and unintended. Professionals help raise awareness by talking to you. There’s been a lot written on why divorce among older adults has more than doubled over the last 25 years and tripled since 1990, among those 65 and older. Some theorize about the impact of the emptiness. I know a lot of families, their kids are in college. My kids are in college. The spouses don’t like each other so much. The kids are there as a diversion and they have to tackle real issues. Better they already knew they had gone their separate ways mentally and maybe physically, but stay together for the sake of the family. With the children gone, the family seems to fall apart.

Another is longevity. As lifespans increase, we’re able to live a lot of years in retirement. If we’re done raising our family or maybe looking for something else, maybe the person that we raised a family with we’ve decided doesn’t have the same interests we have. We don’t like the way they treat us, whatever it is. There are a lot of single divorced people out there over the 50 age mark. It’s notable that the increase in divorce among individuals over 50 is not unique to the US. It happens in other areas too. There’s a National Center for Family & Marriage Counseling Research that indicates post 50 divorces creates a 50% decrease in wealth. Yes, you’re splitting things up. That also corresponds to a 45% decrease in the standard of living for women and 21% for men. If you’re a woman, I’m talking to you out there we need to put things in place to protect your assets and protect you going forward. If you’re going through a divorce, not everything is broken up evenly. Sometimes it’s 50/50. Sometimes it’s 60/40 to either side. Either way because we’re living longer, you’re not going to have that source of income that you had before, or you’re not going to have as much saved up because you’ve lost half of it before you were a unit. Now, you’re not. Some things have to change. The cost of living is less for one person then for two, but not totally half.

Let’s talk about the five areas of concern for a grey divorce. We already know that you’ve got to restructure your life. Divorce attorneys don’t always do a great job. Sometimes they give you assets you can’t pay for or refinance. Let’s take these one at a time. Area number one, property. You could get a house in the divorce, but not be able to pay the taxes or not be able to refinance it out of your ex’s name and in your name because you don’t qualify for the loan side. Prior to arranging an equal or fair division of property, it’s always important that everybody divided out with whatever the state law happens to be. The problem is Texas, Louisiana, New Mexico, California, Nevada and Wisconsin, these are all community property states. Another state either has equitable distribution or can opt-in to a community property state. In an equitable distribution state issues that relate to both marital property and debt are divided in an equitable fashion according to the court. That doesn’t mean that they’re divided 50/50. The court is going to determine separate versus marital property and distributed accordingly. A community property on the other hand, like Texas, gives the husband and wife, people ownership of all the monies earned by either of them from the beginning of their marriage to the date of the separation and all property purchased during that marriage with community money is owned by both likewise with all the debts.

During a divorce, things have to be put in place to protect you and your assets while you move forward in life. Click To Tweet

If you own money before you got married and it’s in a separate account and the spouse never touched it that could still be your separate money. If you bought the property without your spouse on it prior to the marriage that is not considered a community property. To enforce this, a lot of people get prenups and say, “What I had before is mine. What you had before is mine. I want nothing any of it.” Another problem when it comes to gray divorce is the house itself, not only the property, which means land and debt. It’s a major concern because you can sell a house and then distribute the money but then everybody’s got to qualify. What if the spouse can’t fall apart because they don’t make enough money? You’ve taken them out of their house. There are also tax treatments for the sale of a primary residence including the divorce, how long you’ve had the property. There could be gains on it or losses on it. You need a CPA to help you sort this out. “If I get the house, what are my ramifications tax-wise?” The attorneys don’t care about that. They divide stuff and you go on your way. You’re left with these big ramifications. Retirement plans are another concern because it says a substantial asset that has to be valued and divided.

One of the factors that should be considered in the division of retirement assets is the amount of the plan. Would it be considered a marital asset? If the length of employment exceeds the length of the marriage, then the entire plan would not be considered marital property. Only the parts since you’ve been married. Defined-contribution plans like a 401(k) or 403(b) are going to provide statements of the cash value but should be reviewed to determine if there are any outstanding loans. Whether or not the plan is qualified also has an impact. Qualified plans have tax-deferred contributions from the employee and the employer. Nonqualified plans are after-tax money. If I’m contributing on the 401(k) and that all goes through my employer, that’s pretax. The money that I’m contribute to an IRA or something after-tax money that’s after-tax money, but that can still be marital part of the property division if you did that after you were married. These are got tax probations and everything depends on, what happens if I work and she doesn’t work or she doesn’t work and I do work? Who pays for what taxes? Insurance is another big area of concern for grey divorces or any divorces, both life insurance, and health insurance.

There are several insurance provisions and concerns. First is a plan of guarantee, a stream of income with life or disability and we’re talking insurance as an investment. Insurance should also be properly titled. Ideally, the recipient of the income should own the policy, but what if you stayed at home and your husband worked the whole time, and it’s an annuity policy, which is an insurance policy, and it’s not in your name. That’s a problem. Do we have to move that over? Yes, we do to your own policy, but you can’t qualify for that or you don’t want to do that. You’re going to be receiving money from his policy speaking and his name is still going to be on it, but you get your part. I don’t see a problem with that. There’s also something going on with health insurance. If somebody had a job and they retired and you’re still covered by their health insurance, then what happens when you’re not covered by their health insurance anymore? You can continue that coverage through something called Consolidated Omnibus Budget Reconciliation Act or COBRA. When you leave a business, you had a 401(k) at that company, they do COBRA with you, which allows you to continue with the insurance at a higher price. The same thing can happen when you’re divorced. 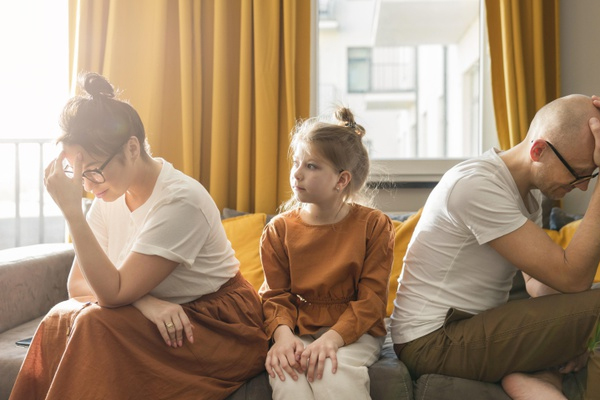 Silver Divorce: People in a silver divorce know that they had gone their separate ways mentally and physically, but they stay together for the sake of the family.

The next thing is post-divorce follow-up. It’s imperative that all the changes or the beneficiaries are all changed to be reflective of the new norm. You have to make sure the right people are on the right policies and the new beneficiaries have been updated. Nothing worse than getting divorced, not updating your beneficiaries, and then when you pass away that divorced spouse instead of your current spouse or no spouse and it was your kids. There’s something called QDRO. If it’s not properly drafted it, won’t be accepted by the plan administrator and that’s what gives you part of someone’s 401(k) money or IRA money. Going through a divorce after 50 is not typically any more devastating than a regular divorce before 50, but people are planning their retirement. When you’re in your 30s you’re not planning your retirement so much as you are living. Financial factors have to be taken into account. What I see for many people is that they can’t qualify for a house. Let’s take the mortgages and talk about how a divorce at any age can affect your home buying potential. If you do not refinance or your spouse does not refinance you off the house, if you get divorced and they get the house and you’re on that note, it prohibits you from going out and getting another mortgage. You’ve got to qualify for the divorce house and your house.

People never understand this until they find a new person to spend their life with, get married and want to buy a house. They find out that their spouse never refinanced them off the house. They’re missing something that they want, which is the new start and a new life. We need to look at just as much, what is divided in the divorce is about the ramifications of having problems after that happens with the divorce. The papers have to be drafted. We have to make sure if you’re getting the house, you can afford to pay for it or you can sell it and you can qualify for another mortgage. Since I’m in mortgages and investments, I see this happens a lot with divorces and there are a lot of problems. There’s a lot of stress like moving your stuff. What you have to remember is the financial stuff is probably more important than that couch. We need to get to this first. If you have questions about any of this, please give me a call. I’d love to help. Divorce at any age, I’ve been through them. I can help you work with financial advisors that you have, CPAs, anything I can do to help, please call. 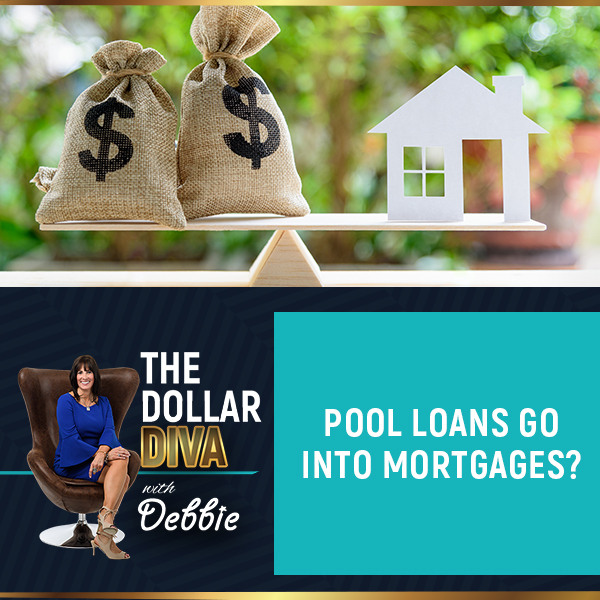 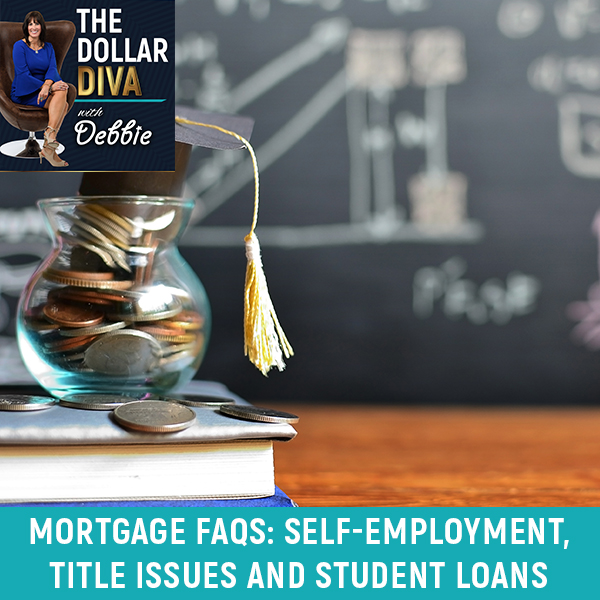 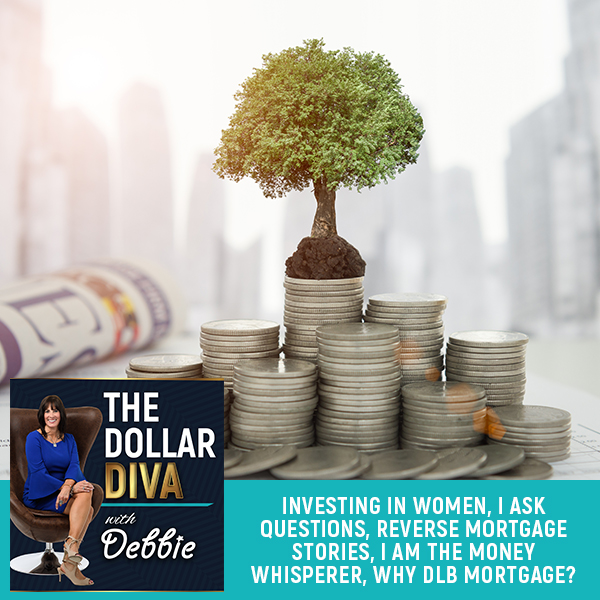 Investing In Women, I Ask Questions, Reverse Mortgage Stories, I Am The Money Whisperer, Why DLB Mortgage?